Jump to content
< Android Training
Translate this page
Other languages:

An Android project contains all the files that comprise the source code for your Android app.

This lesson shows how to create a new project either using Android Studio or using the SDK tools from a command line. 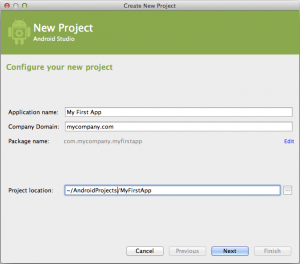 Your Android project is now a basic "Hello World" app that contains some default files. Take a moment to review the most important of these: app/src/main/res/layout/activity_my.xml

Note also the /res subdirectories that contain the resources for your application: drawable<density>/

To run the app, continue to the next lesson.

If you're not using the Android Studio IDE, you can instead create your project using the SDK tools from a command line:

Tip: Add the platform-tools/ as well as the tools/ directory to your PATH environment variable.

Your Android project is now a basic "Hello World" app that contains some default files. To run the app, continue to the next lesson.

Portions of this page are modifications based on work created and shared by the Android Open Source Project and used according to terms described in the Creative Commons 2.5 Attribution License.

Retrieved from "https://www.droidwiki.org/w/index.php?title=Android_Training/Creating_an_Android_Project&oldid=13687"
Category:
Cookies help us deliver our services. By using our services, you agree to our use of cookies.